Secretary of State Mike Pompeo delivered opening remarks at the Commission on Unalienable Rights meeting that took place at the State Department.

The Federal Registrar earlier this month published a State Department note that said Wednesday’s meeting would, among other things, “include topics related to human rights and the American founding.” Mary Ann Glendon, a Harvard Law School professor who chairs the commission, ran the meeting.

“Today we hosted the 1st public meeting of the Commission on Unalienable Rights,” tweeted Pompeo on Wednesday. “I’m confident the Commission will advance the Administration’s unmatched commitment to fundamental human rights and extend America’s legacy as a nation without peer in upholding freedom and human dignity.”

Today we hosted the 1st public meeting of the Commission on Unalienable Rights. I’m confident the Commission will advance the Administration’s unmatched commitment to fundamental human rights & extend America’s legacy as a nation without peer in upholding freedom & human dignity. 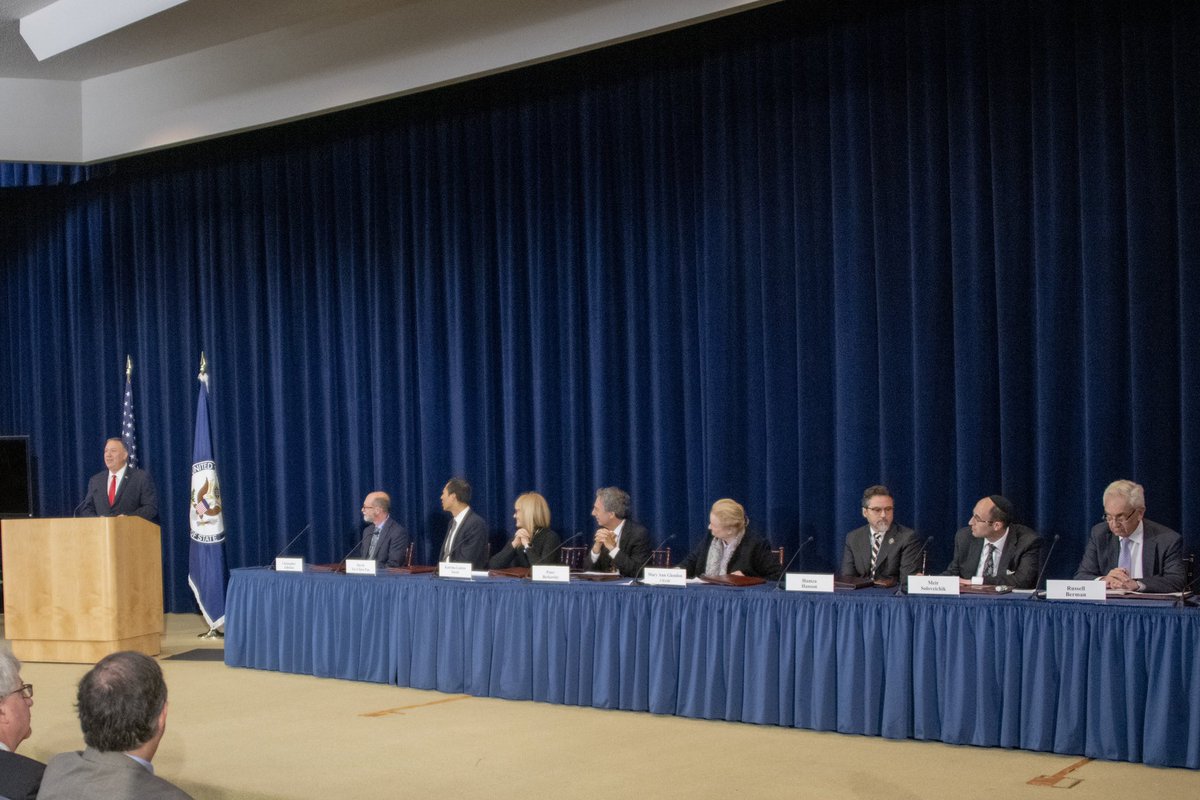 Pompeo in Julyannounced the commission will stress “natural laws and natural rights.” On the same day he also said Glendon, who is known for her vocal opposition to marriage rights for same-sex couples, will chair it.

Hundreds of LGBTQ advocacy groups and their supporters who include former U.S. Ambassador to the U.N. Samantha Power and U.S. Rep. Ilhan Omar (D-Minn.) have strongly criticized the commission. Wednesday’s meeting also took place against the backdrop of continued criticism over the Trump administration’s LGBTQ rights record in the U.S. and its overall foreign policy.

The Council for Global Equality on Thursday noted on its blog the commission — which is “stacked with religiously-focused academics who oppose the rights of LGBTI individuals and the sexual and reproductive rights of women” — took “a deep dive into the meaning of ‘unalienable rights’ in the context of our founding texts, including the Declaration of Independence, which most famously affirmed the unalienable rights to ‘life, liberty and the pursuit of happiness.” The Council for Global Equality in its postadded Michael McConnel, a former federal judge who is a constitutional scholar at the Stanford Law School, was the first person who spoke at the commission’s meeting and said the idea of “unalienable rights” points to “a philosophical concept, rather than a concrete set of rights” and “our founders were ultimately more concerned with freedom of conscience, which includes but is not limited to a narrow understanding of religious freedom.”

“While U.S. moral leadership ebbs and flows, and our commitment to human rights institutions has been uneven over the years, it is simply wrong-headed and ultimately self-defeating to create an artificial human rights hierarchy — one that strips away the universality of human rights and puts a limited number of political and religious rights above all others,” wrote the Center for Global Equality. “Indeed, this enterprise stands to harm religious freedom itself, as it gives philosophical justification to theocratic governments and religious majority populations who are, by far, the leading persecutors of religious minorities around the world. Those same oppressors also happen to be some of the leading persecutors of LGBTI individuals and other marginalized groups.”

Pompeo on Wednesday described criticism of the commission as “unfortunate” during an interview with Family Research Council President Tony Perkins on his “Washington Watch” program.

Perkins is a member of the U.S. Commission on International Religious Freedom. The Southern Poverty Law Center has designated the Family Research Council as a hate group.

“This is a commission that has a set of commissioners from a broad political perspective, different faith traditions, all aimed at something that I think every American can agree to, which is our conception that our founders put in place of the protection of human life and dignity is central to America’s wellbeing and our exceptionalism as a nation, and indeed, are a beacon for the entire world,” Pompeo told Perkins.

“What we’re hoping to do is to take this idea of rights, which sometimes becomes confusing or turns into simply personal or political preferences, and reground it — reground it in the history and tradition of the United States so that we are moored to something more than someone’s fancy of the moment and we come to understand that these incredible cherished, fundamental rights are at the very core of the American experience,” added Pompeo.

The commission’s next meeting is scheduled to take place on Nov. 1.