U.S. Ambassador to Germany Richard Grenell on July 26, 2019, participated in a panel with a group of LGBTI activists that took place at the U.S. Embassy in Berlin. The panel was part of a Trump administration initiative that encourages countries to decriminalize consensual same-sex sexual relations. (Photo public domain)

(WB) The U.S. Embassy in Germany last week hosted a group of LGBTI rights activists from around the world as part of a Trump administration initiative that encourages countries to decriminalize consensual same-sex sexual relations.

Harvey Milk Foundation President Stuart Milk; Caine Youngman of Lesbians, Gays and Bisexuals of Botswana (LeGaBiBo); Hadi Damien of Beirut Pride in Lebanon and Hourvash Pourkian of International Women in Power in Germany are among the activists who participated in a July 26 panel that took place at the embassy in Berlin.

A flyer of the event with the hashtag “Not a crime” the embassy provided to the Washington Blade notes more than 70 countries around the world “outlaw LGBTIQ people.” Richard Grenell, the openly gay U.S. ambassador to Germany, also participated in the event that took place a day before Berlin’s annual Pride parade.

“We all agree that we should be united around the effort to decriminalize homosexuality,” said Grenell in a tweet that included the embassy’s picture of him and the panelists.

We all agree that we should be united around the effort to decriminalize homosexuality. https://twitter.com/usbotschaft/status/1154778795171340289 …

A standing room only crowd at Embassy Berlin to hear from experts leading #decriminalization efforts around the world. 71 countries, 71 different campaigns. Thank you @POTUS for your leadership. 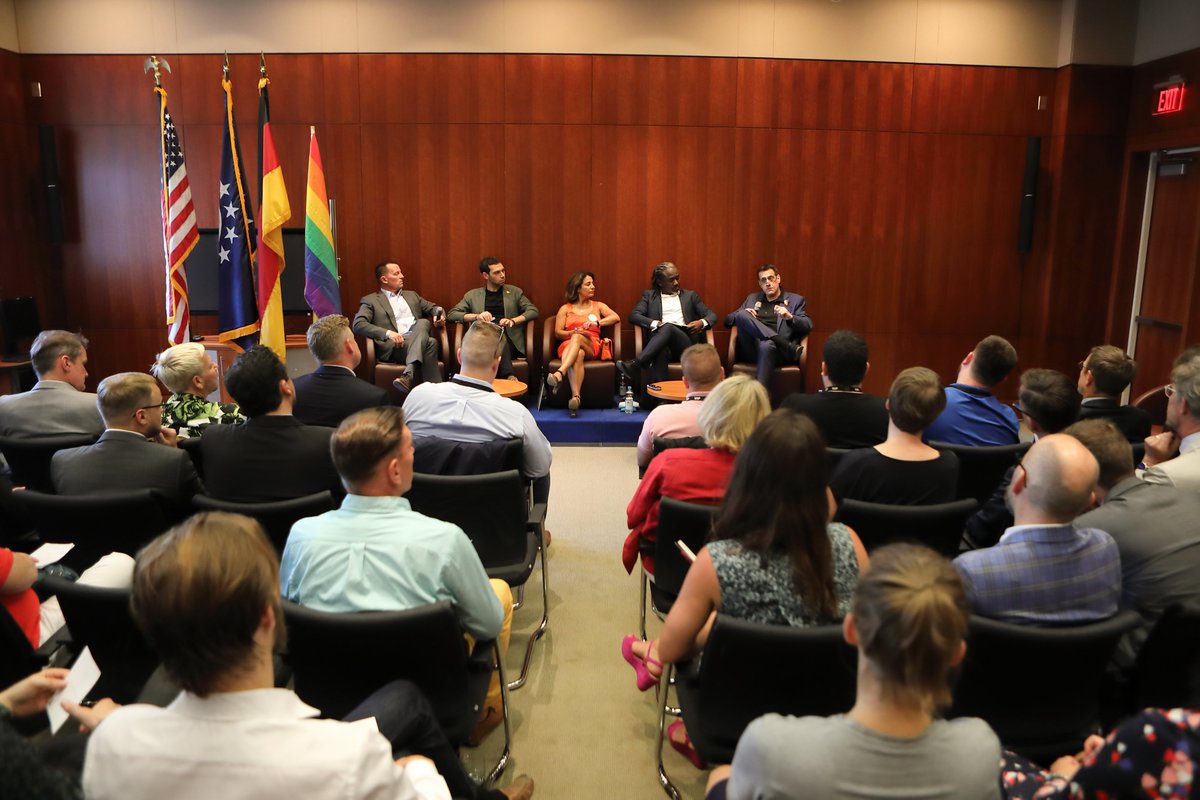 170 people are talking about this

The White House earlier this year announced Grenell would lead the initiative.

Grenell is among those who have publicly criticized Brunei over a provision of the country’s new penal code that sought to impose the death penalty against anyone convicted of consensual same-sex sexual relations. The Trump administration nevertheless continues to face widespread criticism over its anti-LGBTI policies in the U.S. and its overall foreign policy.

Hundreds of activists, advocacy groups, clergy, politicians and former government officials in recent weeks have urged the State Department to disband its Commission on Unalienable Rights, a controversial human rights advisory commission that will stress “natural law and natural rights.” Many activists in the U.S. and around the world with whom the Blade has spoken remain skeptical of the homosexuality decriminalization initiative, in part, because they see it as a way for the Trump administration to advance its Iran policy.

Iran is among the handful of countries in which homosexuality remains punishable by death. Pourkian on Monday highlighted Iran’s LGBTI rights record and noted homosexuality “does not exist” in Shariah law.

“A journalist was asking us if we must talk about homosexuality in the society and culture,” Pourkian told the Blade. “My position is that first of all we must have the right laws and then talk about homophobia as well about LGBTIQ and decriminalize homosexuality.”

Youngman on Tuesday told the Blade he talked about efforts to decriminalize consensual same-sex sexual relations in Botswana when he was on the panel.

Batswana Attorney General Abraham Keetshabe earlier this month announced his government will appeal a June 11 ruling that struck down his country’s colonial-era sodomy law. The Batswana government in 2016 deported Steven Anderson, an American pastor who has publicly said gays and lesbians should be executed and has described the victims of the Pulse nightclub massacre as “disgusting homosexuals who the Bible says were worthy of death.”

“The U.S. needs to do something about its evangelical pastors who are leaving the U.S. going to Africa, my country included, and pushing our governments to either enforce sodomy laws or toughen them up and have the death penalty as a law for the LGBTI (community),” Youngman told the Blade.

Youngman did not specifically criticize the Trump administration when the Blade asked him about the panel in which he participated.

“The event was okay, and I did get some feedback from those in the audience,” said Youngman. “Two statements that stuck with me more are, ‘Thank you for telling us what we needed to hear’ and, ‘Thank you for your honesty.'”

“My friend, Amb. Richard Grenell, will lead a panel discussion in Berlin on decriminalizing homosexuality in the 70+ countries that shamefully outlaw it,” he tweeted.

Tomorrow morning at 8:30 am NY time, my friend Ambassdor @richardgrenell will lead a panel discussion in Berlin on decriminalizing homosexuality in the 70+ countries that shamefully outlaw it. @usbotschaft will live tweet the discussion. Amazing work Ric!

4,000 people are talking about this

An embassy spokesperson on July 27 referred the Blade to its Twitter feed when asked to comment on the panel.

White House counselor Kellyanne Conway on Tuesday told the Blade before Trump left the White House to “ask” him if he was briefed on the homosexuality decriminalization initiative. Conway then said she is “not going to comment on that” when the Blade asked her about it again.