(WB) A beloved UK television host has come out as gay, prompting the LGBT equality charity Stonewall to call his revelation a “massive moment” both for him and for society.

Phillip Schofield, a co-presenter of ITV’s “This Morning” who has been married for almost 27 years, on Friday posted a lengthy message on the program’s Twitter account in which he said, “With the strength and support of my wife and my daughters, I have been coming to terms with the fact I am gay.”

He went on to say that his sexuality had been the topic of “many heart-breaking conversations at home,” but that his wife, Steph, and his daughters, Molly and Ruby, have been supportive “despite their own confusion” as he has grappled with an “inner conflict” that “contrasts with an outside world that has changed so much for the better.” He also expressed gratitude to his co-presenter on “This Morning,” Holly Willoughby, for being “so kind and wise,” and saying she had hugged him as he “sobbed on her shoulder.”

“Every day on This Morning, I sit in awe of those we meet who have been brave and open in confronting their truth – so now it’s my turn to share mine,” the 57-year-old Schofield wrote. “This will probably all come as something of a surprise and I understand, but only by facing this, by being honest, can I hope to find peace in my mind and a way forward.”

He closed with a plea for people to be kind, “especially to my family.”

A statement from Phillip 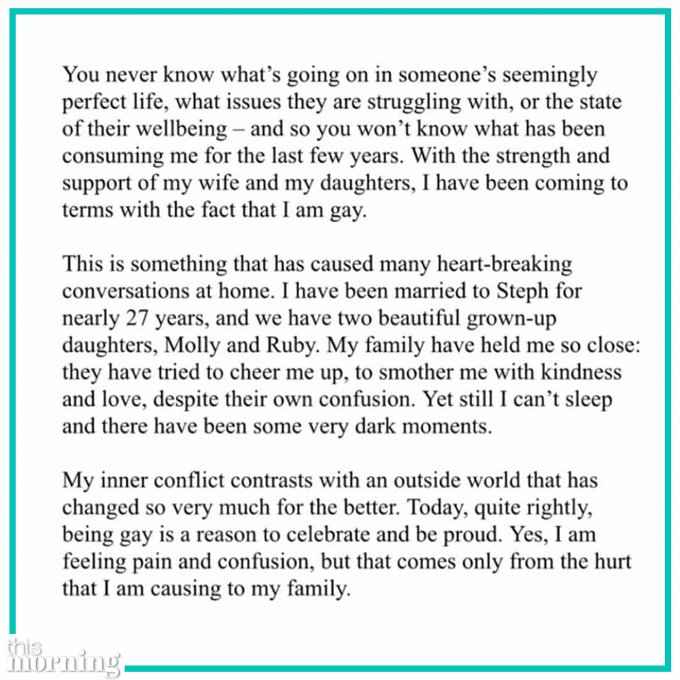 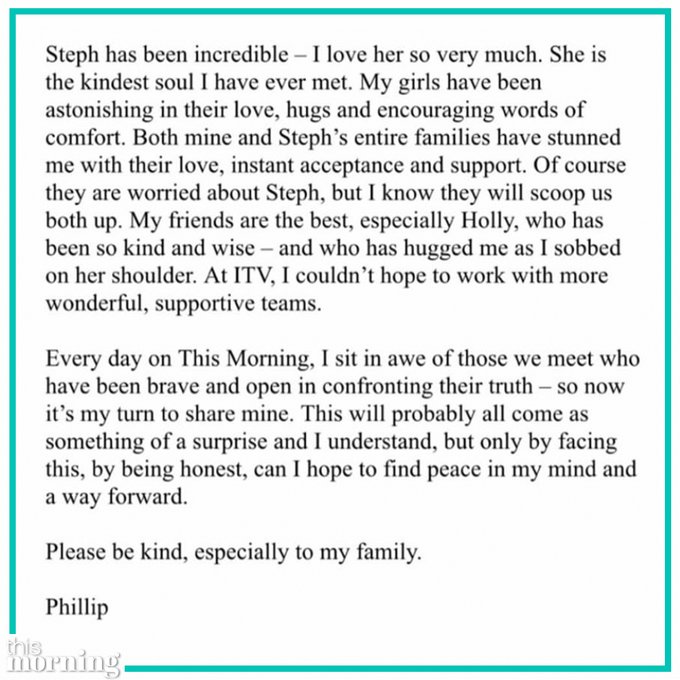 Stonewall subsequently joined followers and fans on social media to offer support and congratulations to the TV star.

Jeff Ingold, head of media for the UK charity organization, said it was a “hugely powerful and courageous move” for Schofield.

He said, “In the first instance, having high profile, visible, out LGBT people can make a massive difference in not just the lives of LGBT people, to you know be able to watch something and see themselves reflected and someone who they identify with, but also for the general public to see and hear the stories of LGBT people can go a long way in changing the way that people see and think and feel about LGBT people as a community.

“It’s a hugely powerful and courageous move Phillip has made to be open about himself, particularly in the public eye at a time when everyone will have an opinion on social media.

“It’s a massive moment I think for him and for society in general.”

Schofield went on Friday’s edition of “This Morning” to open up further about his announcement with Willoughby.

He said he felt “lighter,” having made the announcement, while acknowledging that “it causes pain and upset” for his family.

“The thing is you know this has been bothering me for a very long time,” an emotional Schofield said. “Everybody does these things at their own speed, when they think the time is right. It has consumed my head, and has become an issue in my head.”

Willoughby said she could “feel the relief” from her fellow co-presenter, and told him she would stand by him “for ever and ever.”

Schofield first achieved fame in the 1980s as a presenter on Children’s BBC. He went on to host a popular Saturday morning show, “Going Live!,” and he been a presenter on “This Morning” since 2002. He also hosts another popular UK show, “Dancing on Ice.”