(WB) The U.S. Senate on Wednesday confirmed Robert Destro as Assistant Secretary of State for Democracy, Human Rights and Labor.

Destro, a law professor at the Catholic University of America’s Columbus School of Law, won confirmation by a 49-44 vote margin. The Catholic News Agency reported U.S. Sen. Susan Collins (R-Maine) is among those who voted against Destro.

“I look forward to joining the dedicated team of professionals who are DRL, and to advancing the president’s human rights agenda around the world,” said Destro in a press release that Catholic University released after the vote.

Human Rights Campaign Government Affairs Director David Stacy in a letter that urged senators to vote against Destro noted his opposition to the Equality Act, which would add sexual orientation and gender identity to federal civil rights laws. letter, among other things, also notes Destro “criticized nondiscrimination protections that allowed transgender people to use restrooms and other facilities that correspond to their gender identity” and “called for ‘trench warfare’ with the LGBTQ community.”

“Mr. Destro’s record of disrespect toward the LGBTQ community disqualifies him from being appointed to lead our efforts to protect the human rights of LGBTQ people and others around the world,” wrote Stacy.

Robert Destro, Donald Trump’s nominee to be Assistant Secretary for Democracy, Human Rights and Labor, has a long record of hostility towards LGBTQ people.

His history should disqualify him from serving in any role at @StateDept. @HRC urges the Senate to reject his nomination. 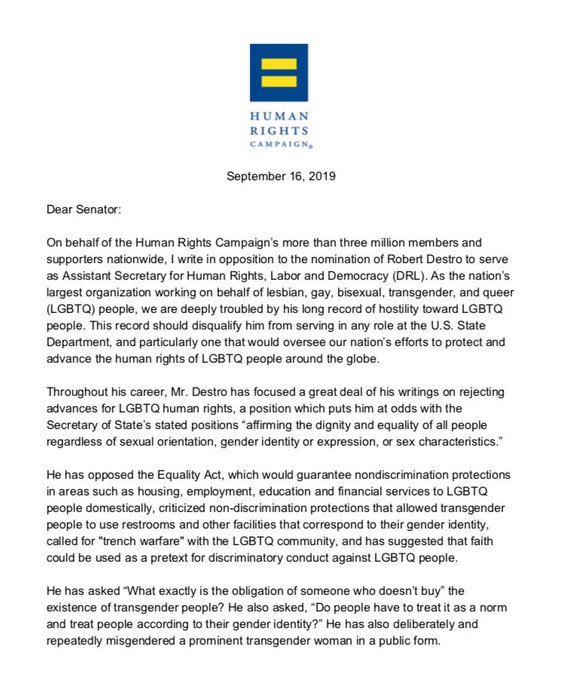 Council for Global Equality Chair Mark Bromley on Friday noted to the Washington Blade that Destro “has a long history of inflammatory statements that denigrate the rights of LGBTI people in this country.” Bromley nevertheless said Destro during his confirmation hearing “pledged to support the State Department’s current LGBTI programming.”

“We will hold him to that and hope to work with him and his office at the State Department to ensure that our country continues to stand up for the fundamental rights of LGBTI people everywhere,” Bromley told the Blade.