An unidentified man was captured on video yelling anti-gay slurs while ripping down a Pride flag. (Image via Twitter)

(WB) D.C. police have posted a video on YouTube of an unidentified male suspect ripping down a rainbow flag from a house on Capitol Hill and have appealed to the public for help in identifying the suspect.

One of the homeowners first posted the video on Twitter and on a community blog on the day the incident took place on July 2. The video was taken from a security camera attached to the house where the suspect ripped off the pole on which the flag had been hanging. 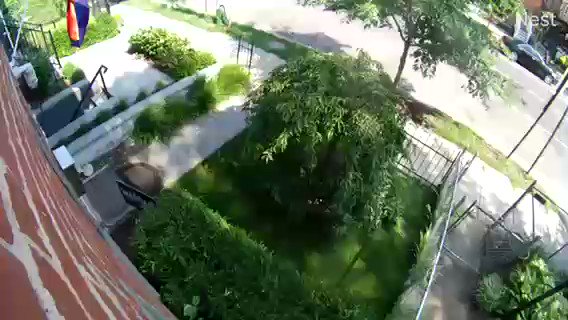 . ⁦@PoPville⁩ ⁦@CMCharlesAllen⁩ ⁦@MayorBowser⁩ ⁦@DCPoliceDept⁩ This happened in broad daylight at our house on Independence at 17th St SE this morning while my wife was walking our dog. People like this should not be on our streets.

It shows the male suspect walking up to the house, pulling the pole off of the mount on which it was attached to the wall of the house, and slamming the pole and flag onto a fence. The video camera, which also has an audio recording component, also captured the suspect shouting anti-gay slurs as he grabbed and damaged the flagpole.

“The flag itself was not damaged,” said Betty Rhoades, who along with her husband, owns and lives in the house where the rainbow flag had been displayed.

“The flagpole, however, was destroyed – he ripped it out of its mount which destroyed the mount and the bottom of the pole where it attached and then he smashed it into our fence, denting it and rendering it unusable,” Rhoades told the Blade in an email.

“We displayed the flag to acknowledge and celebrate Pride month,” she said. “We have many dear friends in the LGBTQ+ community, and especially lately (with the increased assaults on LGBTQ+ rights in this country), we wanted to show them and others that our house is a safe space where they are welcome and supported,” she said.

D.C. police, who came to her and her husband’s house to take a report of the incident, have listed it as an offense of destruction of property and classified the incident as a suspected anti-LGBT hate crime.

Rhoades said police sent over a forensic team to attempt to obtain fingerprints from the flagpole. She said the officers took her and her husband’s fingerprints to rule them out from any other prints found on the pole. A police spokesperson told the Blade police never comment on evidence they obtain in an ongoing investigation.

Anyone who recognizes the suspect shown in the video and several still photos taken from the video is asked to immediately call D.C. police at 202-727-9099.