(WB) Aaron Schock, the former Republican congressman who was long suspected of being gay, came out in an Instagram post on Thursday.

“The fact that I am gay is just one of those things in life in need of explicit affirmation, to remove any doubt and to finally validate who I am as a person,” Schock said. “In many ways, I regret the time wasted in not having done so sooner.”

Schock, who served in Congress from 2009 to 2015, has been dogged by gay rumors for some time. The congressman resigned from Congress amid scandal involving his use of campaign and funds and was later indicated in connection with the imbroglio, but all charges against him were dropped last year.

As an Illnois Republican, Schock built an anti-LGBTQ voting record. Among his votes in Congress were against “Don’t Ask, Don’t Tell” and hate crimes protections for LGBTQ people as well as affirmation of the anti-gay Defense of Marriage Act.

Under questioning from reporters in a video that later became a meme, Schock infamously replied when asked why he hadn’t come out in favor of same-sex marriage, “I just haven’t.”

Throughout his time in Congress, Schock denied he was gay (as did his father). On the floor of the Republican National Convention in 2012, Schock burst out at journalist Michelangelo Signorile it was “inappropriate and ridiculous” to ask the lawmaker about his sexual orientation and the inquiry was not “worthy of response.”

After his time Congress, photos allegedly of Schock at Coachella suggesting he was gay emerged on social media. A video also emerged of Schock in Mexico inserting paper money into the thong of a male dancer.

As any doubt begin to fade away over Schock’s sexual orientation, many LGBTQ people were angry with him for engaging in freedoms won by LGBTQ activists without having apologized for his anti-gay voting record.

In his coming out post, Schock appears to justify his anti-LGBTQ past as a congressman by reducing LGBTQ rights to marriage equality, saying Hillary Clinton and Barack Obama once opposed it.

“That fact doesn’t make my position any less wrong, but it’s sometimes easy to forget that it was leaders of both parties who for so long wrongly understood what it was to defend the right to marry,” Schock said.

Schock in his Instagram post affirms if he were in Congress today he’d “support LGBTQ rights,” but doesn’t seem to drop his affiliation with the Republican Party.

“I realize some of my political positions run very much counter to the mainstream of the LGBTQ movement, and I respect them for those differences,” Schock said. “I hope people will allow for me the same.”

Schock was seen attending a fundraiser with President Trump in Beverly Hills two weeks ago, a Republican source familiar with the event tells me.

A look at the social media posts of LGBTQ advocates demonstrates a lack of enthusiasm over Schock for coming out.

things Aaron Schock should apologize for:

21 people are talking about this

If you check Aaron Schock's Instagram profile, there's something else there as opposed to shirtless pictures.

He just came out as gay. https://www.instagram.com/p/B9W8bGvjTp-/ 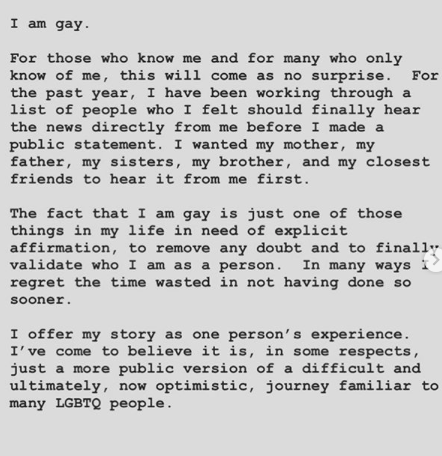 I would like for @aaronschock to fight the anti-LGBTQ Trump admin. But I highly doubt he would do that.